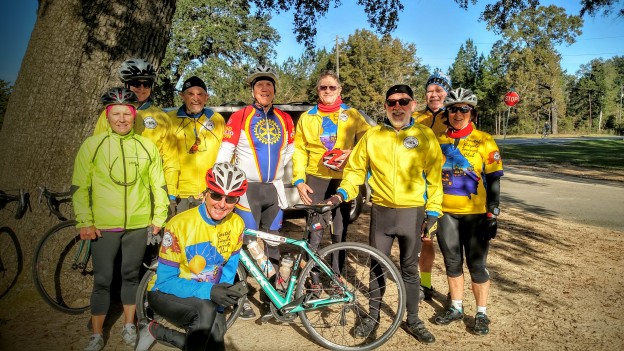 Departs from Hill on Wheels Bike Shop in Richmond Hill at 7:30am each Saturday.  Approximate 32 mile route to Fort McAllister and back.  Generally two pace groups (A and B).  Club participants get together at Omlette Cafe on Highway 17 after the ride for late breakfast/early lunch.

Leaves from the Habersham YMCA at 8:00am on Sundays.   Approximate 30 mile ride around Burnside Island and Isle of Hope (and sometimes Dutch Island) with brisk pace and some sprints.  Participants get-together at the Coffee Deli in Habersham village after the ride.

Departs from parking lot of Skidaway United Methodist Church at 8:30 am on Tuesdays.  34 mile ride around Skidaway Island.  Usually 2 or 3 groups with varying speeds and some sprints.  Participants get-together for breakfast on the first Tuesday of each month after the ride. For the brave hearts, there is a 6am roll-out, resulting in approximately 50+ total miles.

Wednesdays – Isle of Hope aka No Sweat Wednesday

Departs from the Sentinent Bean coffee shop, 13 E. Park Street, just across from Forsyth Park (Bull/East Park).  Ride is moderate pace, meandering, multiple turns and loop backs.  Leave town, journey on bike lanes to Bonaventure, then over to Thunderbolt, then slide on down to Isle of Hope (sometimes stopping for watermelon samples from Polk’s in Sandfly) for mind boggling loops, then back to the Truman Linear trail to Lake Mayer, then back on the trail to end (and of course eat/drink) at Coffee Deli in Habersham Village.

Departs from parking lot next to ball fields by Montgomery Street entrance of Hunter Army Air Field at 8:30 AM on Thursdays.  A permit from HAAF security staff at Montgomery Street entrance is required to enter base. (See either Rich Wharff r02581@icloud.com, Kim Turner kimbooskie@gmail.com or John Arney johnarney@gmail.com to procure a permanent ID visitor pass) 20-40 mile ride around base usually with 1 group splitting into 2 groups by speed.  Participants meet at Sly’s (sliders and best fries in town) on Abercorn after the ride. 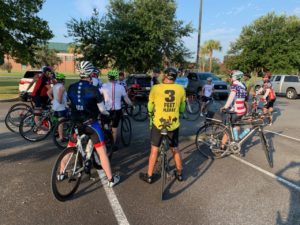