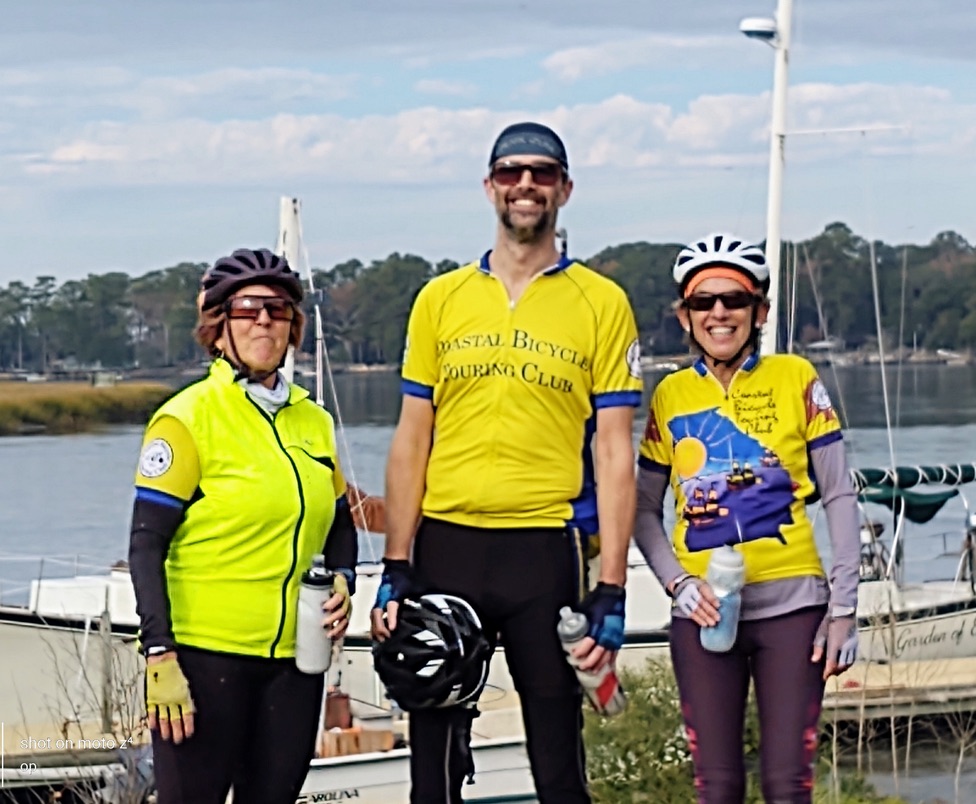 From John A.: Excellent ride today with 2 groups and perfect crisp fall temps at the beginning. John, from Florida on his way to Greenville, joined us, along with Aaron, a Marine pilot who just moved to Savannah. We also had Darrel, who was visiting Savannah for a few days. Unfortunately, Roy’s pedal broke on the way out of the parking lot, and he was unable to enjoy the ride. Some enjoyed yet another fine lunch at Mellow Mushroom after the ride.

Forgot to mention Jonie joined the club and rode with us today. Also, Jackie set a record average speed riding with the “A” group (getting in shape for her upcoming cycling trip to Utah).

Great fall weather in Richmond Hill for this ride. Great turnout, including Amos and Craig. We had two groups (albeit a bit lopsided toward the long ride). We’re really in the weather sweet spot these days, so I definitely encourage everyone to get out to the rides while the temps are mild and humidity is low. Wish I had gotten a pic of the ray I saw at the marina, but you’ll just have to make due with our smiling faces, I suppose!

I finally made my long-anticipated return this weekend! Great ride in Rincon, though my sensors were acting up so I managed to lose the group at the start and biked about 12 miles solo to catch up to them. Fortunately, the Wharffs were in Springfield with their own technical malfunctions and I managed to reconnoitre with them and get a healthy dose of Deb pulling to get to the rest stop where we rejoined the convoy! Thanks, Deb and Rich! Everyone was in great spirits on the way back, and we enjoyed our typical fiesta at El Real afterward (Fajita Avocado FTW!).

No update was provided on this ride other than that Susan made her triumphant return (hence the victory pose). Great turnout apparently!

Phenomenally fun ride this past Saturday in too-long-neglected Harris Neck! By far one of my favorite rides for scenery and wildlife and, most importantly, minimal traffic! This edition began with a classic moment where I said it smelled like rain, Eric pointed to a visible shower to our left, and Marc advised us that, in fact, rain was NOT in the forecast – needless to say, it was a downpour within moments, and we were all soaked! We had a couple other small showers in that first half of the ride, but they were the pleasant mid-summer-cool-off kinds of showers and kept the August heat out of this ride completely. Everyone was dry by the rest stop, and the temps stayed oh-so-comforable for the remainder fo the journey. We did hear some good peals of thunder once we made it to the Wildlife Refuge (where we saw Wood Storks, Anhingas, Cormorants, and Egrets but no Alligators, for a change), so our group decided to cut the long ride short (still got 42 miles, though). Good turnout despite the commute – we had two ride groups, and I think that Chris D. led the Fun Group in a round of post-ride milkshakes!

Another great ride – if y’all haven’t ridden Hardeville since we started the new route, it’s high time you correct that mistake! Weather was a bit humid, I must say, but it never got uncomfortably hot (but it’s definitely two-bottle season right now, David and I agreed). Speaking of David, he almost completed a whistle hat-trick in a single pull!! As it was, he and Tim combined to earn the Club’s first Wall of Shame after consistently pushing above 21 mph – congratulations to you both!

We’ve really lucked out with summer weather of late. Temps on this ride started in the mid 70s and edged to mid-80s on the ride, but it was very comfortable, especially as much of the route is shaded. I called this Kilkenny+ because the long ride added a Fancy Hall kicker to bring this baby up to 41.5 miles. For those of us who’ve ridden a bit sporadically of late, it was a gluteal challenge but a great ride nonetheless. We had an ample long group of nine and an intimate short ride of two. Lots of pictures from Kathy S., John A. and myself.

A great Rincon ride! We were missing a lot of the usual suspects in the fast group, but that gave us a somewhat more relaxed pace than we’ve had of late, which was refreshing. Speaking of refreshing, who’d have predicted mid-80s temps in south Georgia in the middle of July! It felt really great, especially as we had overcast skies for the vast majority of the ride. Jimmy D (aka James Dasher) pioneered a new start to our route, which all agreed was a vast improvement (must less traffic and newly-repaved and shaded roads). I worried we were going to lose some distance, but it is almost exactly the same as our original route. Kathy S. led the fun group, who ended up averaging 16.8 mph (to Roy’s chagrin, apparently, but I think it was just a day to go faster). Sorry, but we only got pics at the start.

Per John A: Good turnout for the Liberty Trail Ride. The A group got a late start due to 4-5 of us helping Tim mount his wheel after changing a flat. Two groups eventually broke up in to three on the way back. “A” group had a fast finish thanks to teh Taylor half-mile pull technique. Great lunch after the ride at Smokin’ Pig.

I’m paraphrasing John A here, but: Good turnout for the Skidaway Island ride on July 2nd. Pam Pierce led the fun ride for new and returning riders, and Cathy Reiman, on a break from the cool temps of Maine, led the too-serious group. You know where John’s head was because he only sent in pictures of the post-ride lunch at Your Pie in Sandfly.

Great turnout in Hardeeville this week. Weather was warm but pleasant. This is a great summer route, as there is a lot of shade along the way. It was my first time on this revised ride (formerly the Hospital Ride), and I think it is much improved from the old version – we cut out the old pothole mile through town and found a way to avoid the busy highway. We need to find a lunch place to follow this ride, so everyone start researching restaurants!

John A.: What can I say about the ride? Well, it was kind of a small group, but we had 2 visitors from Atlanta join us. It was also pretty hot, but as you know there is a lot of shade along the way. We had a fine lunch at Sly’s after the ride.

I led this ride on what felt at the start like a sauna of day; however, once we got rolling the temps felt fine (evaporative cooling in 110% humidity, I suppose). Note the very large turnout, undoubtedly a result of the ride leader’s charisma. Of note on this ride was that Hwy 17 appeared to have actually been cleaned; however, Little Neck is still an obstacle course of potholes. We had some new riders come out as well as some irregular members. Great time with lunch at Mariachi’s (huevos con chorizo con cerveza grande para la victoria)!

Fresh start for Ride News, CBTCers! After feedback from the Club non-Facebookers (myself included), I am re-starting the Ride News updates. Rejoice! I’m also archiving the old news and will likely keep this page current to the last five or so rides.

Ellabell was a joy as always, though I think we were all surprised at the extent of the tornado damage up there. Hendrix Park, our starting point, has basically been obliterated – the main building in particular was ravaged, as was the neighborhood next door. I don’t think a single tree remains standing. It was a somber scene but the Ellabellians look to be resiliently building back. We had a very nice ride with great temps and ate at Sandra’s Seafood afterward.